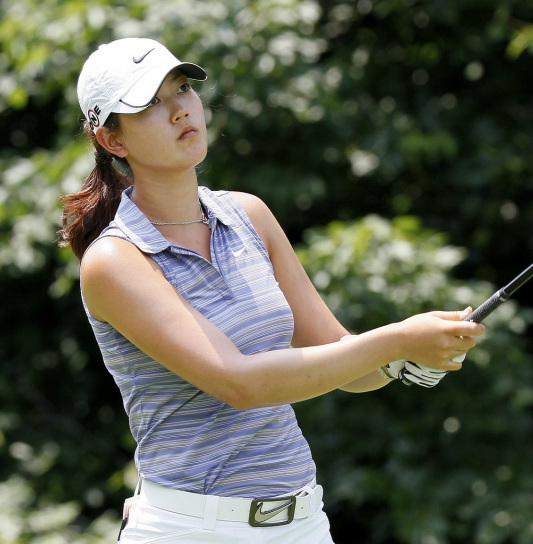 As she lines up her golf club with the golf ball, she focuses only on where the ball will go: Near the hole or in the green. Then, aside from the ball, she practices her swings to be able to get the golf ball to where she wants it. When she believes that her swings are about the same and she guarantees that she make the perfect hit, she returns to her orginal stance. Her main and only focus is the goal. Whose focus is that, you may ask. This focus belongs to the young female golfer, Michelle Wie.

Born on October 11, 1989 in Honolulu, Hawaii was Michelle Sung Wie. She was born to Byung-Wook Wie, her father, and Bo Wie, her mother, having to be the only child of her immigrant parents. Byung-Wook was a professor of transportation management at the University of Hawaii. Bo was actually an amateur golfer herself. She was a champion in 1985. Also, she had competed in a Miss Korea pageant. Wie was a mutiple citizen to South Korea and the United States when she was born, but changed that recently to a citizen of South Korea in Feburary of 2013.

Wie As A Child

Wie was a very special and different child. She wasn't like all of those kids that was around her. That's mainly because they wouldn't take golf practices with their father as a coach. When Wie was only 4 years old, she started playing golf. Her father introduced her to this sport that she was going to enjoy. After playing a few times, he realized that he was right. She really liked playing golf. So, he chose to teach her and become her coach. For five years, Wie was becoming better and better. That was when her parents realized that she was very talented. She was 9 when she recieved better scores than her parents when they'd play together. The next year was such a breathtaking year for many golf lovers and viewers. At only age 10, Wie was qualified to play at a major adult (18+) event. This was one of the harest and challenging events to get qualified in and it was The U.S Women's Amateur Public Links Championship. Just being qualified doesn't mean "just being qualified" when it came to Wie. In fact, she was the youngest one to ever qualify for this event. So, her name was already written under the history of golfing. Then, when she was 12 years old, she would win many junior amateur tournaments. It's mainly because she had this talent that not many professional golfers were able to attempt on the first try - she was able to hit the ball as far as nearly 300 yards. She was indeed very talented. And it makes sense for her to be able to do that because she was a golf prodigy.

She really liked to hit the ball really hard. That's all she did.
-Byung-Wook Wie

The Teen Years of Wie

As Wie played and won many tournaments, her teen year had the most impact on her life. When she was 14 years old, she became the fourth female to play in an even on the PGA Tour. She also played at three other games on the PGA Tour. She eventually lost the quarterfinals to a long-time champion, Clay Ogden. Then, it was 2005, and she was 15 years old. That was the age that really changed her life. On October 5, 6 days away from her 16th birthday, she became a Professional Women Golfer. She was signed with Nike and Sony so they could be her sponsors. They were also worth more than $10 million per year. Wie was professional, but she was underage to be able to be on tours. The youngest you could be was 18, but two players were 17 because their skills and overall scores were eligible for this tour. Until she was old enough to be eligible, she chose to play in certain amounts of games in the tour. She played her first game as a Pro., which was the 2005 LPGA Samsung World Championship. After playing her third-round, she was soon disqualified because she made a penalty drop. That is when you drop the ball closer to the hole than were it's original spot was. It was an act of accidental cheating that caused her to be taken out. It's completely fine for a new Pro. to be disqualified or to lose in their very first game as a Pro., so Wie wasn't discouraged about this game. She later played many other games in the GPA Tour and as she did, she would improve her skill every time. In May, 2006, she became the first female medalist to qualify for the Men's U.S Open. Then, in July, she played in the LPGA HSBC Women's World Match Play Championship. She lost, 4 to 3, to another long-time champion, Brittany Lincicome. In 2009, she gained her LPGA Membership, in which she was able to play in all games and participate in the tour itself. She also planned and wanted to play in tournaments against men.

Even though Wie goes international, her schedule was very hard to keep up with. That was because she was in college, specifically Stanford. Of course she had to attend school, not drop out. So, she graduated in 2007 from Punahou School. In December 19, 2006, though, she decided to attend Stanford, which was where her family attended as well. Her grandfather was a professor and her uncle and aunt were graduates there. She was enrolled in 2007, but if you looked at it as she was a professional golfer, she wasn't able to play for Stanford's golf team. She only attended the fall and winter quarters, in which she was only there from September to mid- March for three years. When she was absent for the rest of that year, she would go on to play professional golfing. In March 2012, age 23, she successfully finished all of her studies, so she graduated in June, making an effort to attend this event. She graduated with a major of communications. Ever since that day, Wie has gone and played professionally in many games and tournaments.
Powered by